Most alphanumeric LCDs (often called smart LCDs, as they include a controller in the same board and don’t need a powerful CPU to use them) are part of an industrial standard designed for interfacing with embedded systems (mostly microcontrollers or microprocessors). They come in many different configurations, for example 8x1 (1 row, 8 characters per row), 16x2, 20x4, and even bigger ones are available.

These LCDs are designed to show text (and up to 8 custom-defined characters) so they are used in simple machines that don’t need to display complex information, such as printers, fax machines, copiers, etc. They can include a backlight, which can consist of LEDs or fluorescent tubes (in older models).

They often come with a 16 pin interface, with the following typical pinout:

The LCDs can operate in both a 4-bit and an 8-bit mode. In the first one, bytes are sent divided into 4-bit nibbles, sending them first in the higher nibble of the data bus (Bit[4..7]). The commands in the 4-bit mode are the same ones, the only thing that changes is the initialization process.

The internal ROM usually has every ASCII and sometimes Greek or Japanese characters. It’s possible to use up to 8 custom-defined characters (corresponding to ASCII positions 0 to 7) which are stored in volatile RAM.

A computer can easily control one of these LCDs, for example using the LCD Smartie program and a simple parallel port adapter.

To connect one of this LCDs to a microcontroller, this connection can be used: 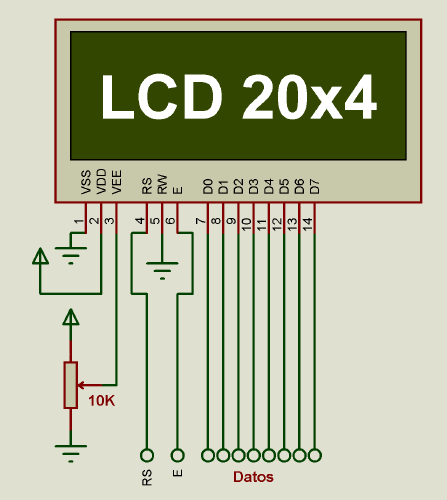 As the image shows, the contrast can be adjusted with a 10K potentiometer, in a resistive divider configuration. The RW pin can be grounded since most applications don’t need to read from the LCD. Data lines must be connected to a port of the microcontroller (keeping the same order). The other control lines should be connected as well.

Sending a command or data to the LCD:

After turning on, the LCD’s controller does some internal tests, cleans its memory, which can take up to 20 milliseconds. That’s why a delay might be required, to ensure proper initialization of the controller of the LCD.

Action: Erases the LCD, places the cursor in position 0

Actions: Selects the address of the internal memory that will be affected when reading and writing.

The DD memory stores every character displayed on the screen. For instance, in a 20x4 LCD, the lines are in the following memory positions:

Action: Writes the specified data to the address previously set, and increments the internal pointer.

The full initialization sequence is the following:

After doing the init sequence, writing a character in an (x;y) position is as easy as doing the following:

After doing that, the desired character will appear in the LCD, in the selected position. It’s possible to expand the software by storing x and y coordinates so that a long text can be split into two different lines.

Built-in characters are usually the following ones: