In order to define a PIC microcontroller, we will first need to know what a microcontroller is. In broad strokes, it’s an integrated circuit that has most of the stuff a computer has:

The main advantage of microcontrollers over microprocessors is that they cost less, have lower power consumption and they don’t need much external circuitry in order to work. PIC microcontrollers are usually chosen because of their simple architecture, their low cost and great amount of code available in the web, as well as the great amount of tools to program them.

To start with a small project with PIC, we need three main things:

For instance, the PIC16F628A doesn’t have many peripherals, but it’s a nice choice to enter the world of microcontrollers. It has 2K of program memory, 224 bytes of RAM and 128 bytes of EEPROM memory.

The models have different identification codes: 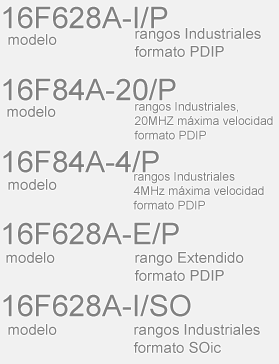 How to make a program for a microcontroller

There are three basic ways to do it: using C, using Basic and using Assembler

To compile the C code, the main used program is CCS, a C compiler for Microchip microcontrollers, which is fast and quite good. The only issue is that it’s not free. The typical program used for testing microcontrollers is blinking an LED, since it can be used to validate that the environment, compiler and programmer are all working fine.

In C, the program used is quite easy to understand:

To use Basic, a simple IDE that features a basic compiler is called PIC SIMULATOR IDE, it’s paid as well. The code used was the following:

To program it in Assembly, MPLAB IDE can be used, as well as gputils (a free and open alternative). The assembled program used less program memory than both before, but is harder to maintain and to understand.

How to transfer the HEX file to the microcontroller

A PIC programmer (sometimes called burner) is needed. One of the cheaper ones is called JDM, and connects to the PC using the serial port. There are also multiple official programmers, such as the PICKit series, as well as clones of those. Special caution is needed before programming, since there are some fuses that can make the microcontroller not programmable anymore.

Some typically used programs are IC-Prog, Pony Prog, WinPic800, PicPGM. Most of them support different types of programmers.

There are also solutions that use Zero-Insertion Force (ZIF) sockets, to avoid breaking the fragile IC pins after several insertion/removal cycles.

Also, most microcontrollers allow for In-Circuit Programming, which allows for reprogramming the microcontroller without removing it from the circuit. This needs five connections that connect it to the programmer

These lines are the ones called Vpp, Vss, Vdd, Pgd and Pgc. If those lines were used by external circuitry, protection components may be needed, since they get driven as outputs. 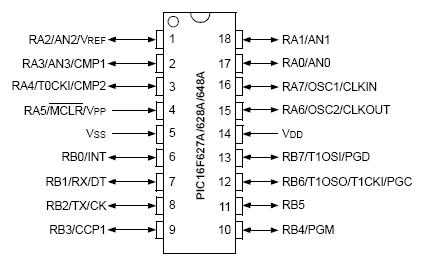 A simple PIC test schematic is the following: 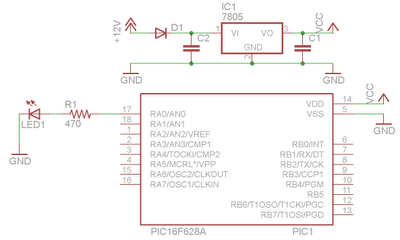